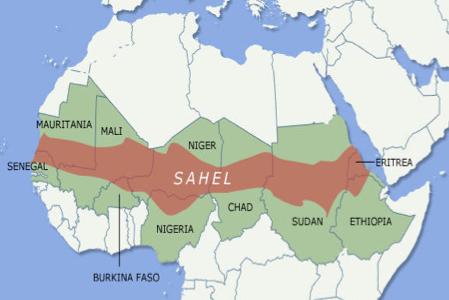 The people of the Sahel have made a huge contribution to the world’s cultural, artistic, musical, architectural and scholarly heritage. Testament to this, the world’s first university, the prestigious Sankoré University which was established under the reign of Mansa Musa, the most famous ruler of the Mali Empire, was in Timbuktu in present-day Mali.

Yet, today in 2021, the Sahel is facing one of the fastest growing displacement crises in the world. Conflicts, severe droughts and devastating floods have an impact on the lives of the 150 million people living in the Sahel region. An estimated 33 million children, women and men face chronic food insecurity, the risk of violence and are in urgent need of basic services such as food, clean water, shelter and health care.

Indiscriminate violence perpetrated by armed actors against civilians have forced more than 2.9 million people to flee across the region both within countries and across borders – especially in Burkina Faso, northern Cameroon (Far North region), Chad, Mali, Niger, and Northeast Nigeria (Borno, Adamawa and Yobe States).

Similarly, attacks on schools, education facilities and personnel continue to expose children to heightened risks of recruitment, forced labour, early marriage, trafficking, sexual violence and exploitation. The surge in armed violence is endangering the lives, well-being and the future of hundreds of thousands of girls and boys as their survival, education, protection and development are all being affected. Over 5,000 schools are closed or non-operational in parts of Burkina Faso, the Far North of Cameroon, Chad’s Lac Province, Mali, Niger and Nigeria’s Northeast regions. As the crisis continues, an entire generation is at risk.

As is always the case, the conflict in the Sahel affects girls and women disproportionately. Women and girls in the region are often responsible for providing meals and water for their family. But when those resources become scarce, they often go without meals so that their families can eat.

Historically, and still today, even in the face of extreme adversity, people across the Sahel continue to show unwavering resilience, optimism and outstanding courage despite the crisis that surrounds them.

However, meaningful action and support are needed to shore up that resilience; end the ceaseless violence that has been causing immense suffering for the civilian population; and help millions of people across the Sahel region regain peace and stability in their home communities and land.

We shall continue to devote our attention to the distressing situations experienced by individuals and communities across the Sahel region and speak out and take action with our partners on the ground on behalf of those who have no voice.

In 2012, House of Mercy Children’s Home, Lagos, Nigeria (HOM) contributed a token and also lent its support to on-going efforts to provide humanitarian assistance to children during the food crisis in the Sahel where 1 million children were exposed to hunger and malnutrition across 8 countries of the Sahel region of West Africa (Burkina Faso, Mali, Mauritania and Niger; the Sahel belt of Chad and the northern regions of Cameroon, Nigeria and Senegal).

Our vision is of a prosperous and peaceful African continent where every child has access to healthy food on a daily and regular basis and is enabled to reach his or her full potential.